This article builds on the prior article: CloudFormation.

Not only are we going to manage our application environments with Cloudformation but we are also going to manage our deployment pipeline in the same manner. CodePipeline (Not to be confused with CodeDeploy) is the Continuous Integration and Continuous Deployment (CI/CD) offering from AWS. There are a lot of options to handle CI/CD responsibilities but we prefer CodePipeline because all it requires is an AWS account to get started so we don’t have to worry about integrating with other tools.

Start by creating a simple pipeline.template.yml file with the following content:

You will need to check all the Repo and admin:Repo- scopes. 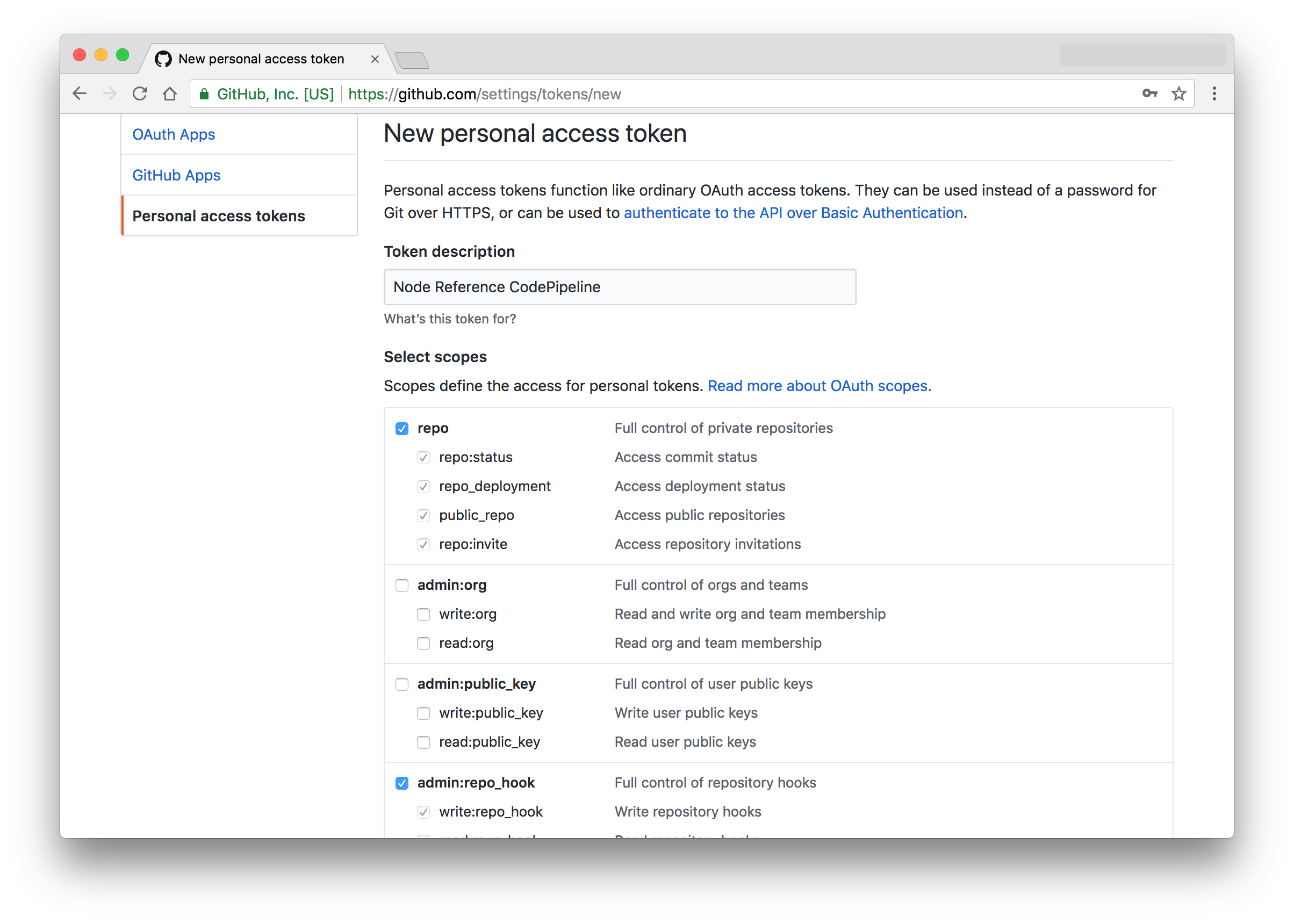 Save this token in a safe place for now (Do not check it into version control). We will need it in the next step.

Then configure the AWS CLI:

Then deploy the stack by running the following command, substituting your Github Personal Access Token for RepoToken below:

Your first stack doesn’t create much yet as you’ve only created an S3 bucket so far. We started with something small, because we like to deploy cloudformation templates with minimal changes between deploys so that a failed deploy will only rollback a small change and identifying the source of the failure is easier. The reason we started with the S3 bucket is that we need it to store “artifacts”, specifically our application source code and the outputs of the builds.

Next, we will add an IAM Role to the template. We will configure CodePipeline, CodeBuild and CloudFormation to assume this role when they execute. Because of this, we need to both ensure the role has the appropriate permissions to build and deploy our project as well as grant these AWS services the ability to assume the role.

Important Note For simplicity of this blog series, we are configuring multiple environments inside of a single AWS account. However, we very strongly recommend setting up an AWS account per environment in practice. It’s a seemingly counter-intuitive approach, but there are countless benefits to doing so that are beyond the scope of this series. When employing multiple accounts you specify multiple roles or even specify role ARNs to assume inside of these different accounts, representing each deployment environment.

Add this under Resources in your pipeline.template.yml:

Next we can update our stack by running our deploy command again. This time we won’t specify the RepoToken parameter as CloudFormation will use the previously specified value. We also need to pass CAPABILITY_IAM so we are allowed to create an IAM Role:

From this point forward, we can use the above command to update our pipeline stack as needed.

We now need a place to store our Docker images. We probably don’t want to push them to the public Docker Hub and since we’re trying to keep things simple, we can create an ECR Repository by adding the following snippet to our CloudFormation template and re-deploying:

Now we can start working on the actual build and deploy process (a.k.a our “Pipeline”). Add the following resources to pipeline.template.yml. (Make sure to update the Repo and Branch variables below).

Execute another stack update and you should see a build kick off in the CodePipeline console and fail at the build stage because it can’t find a buildspec.yml file. 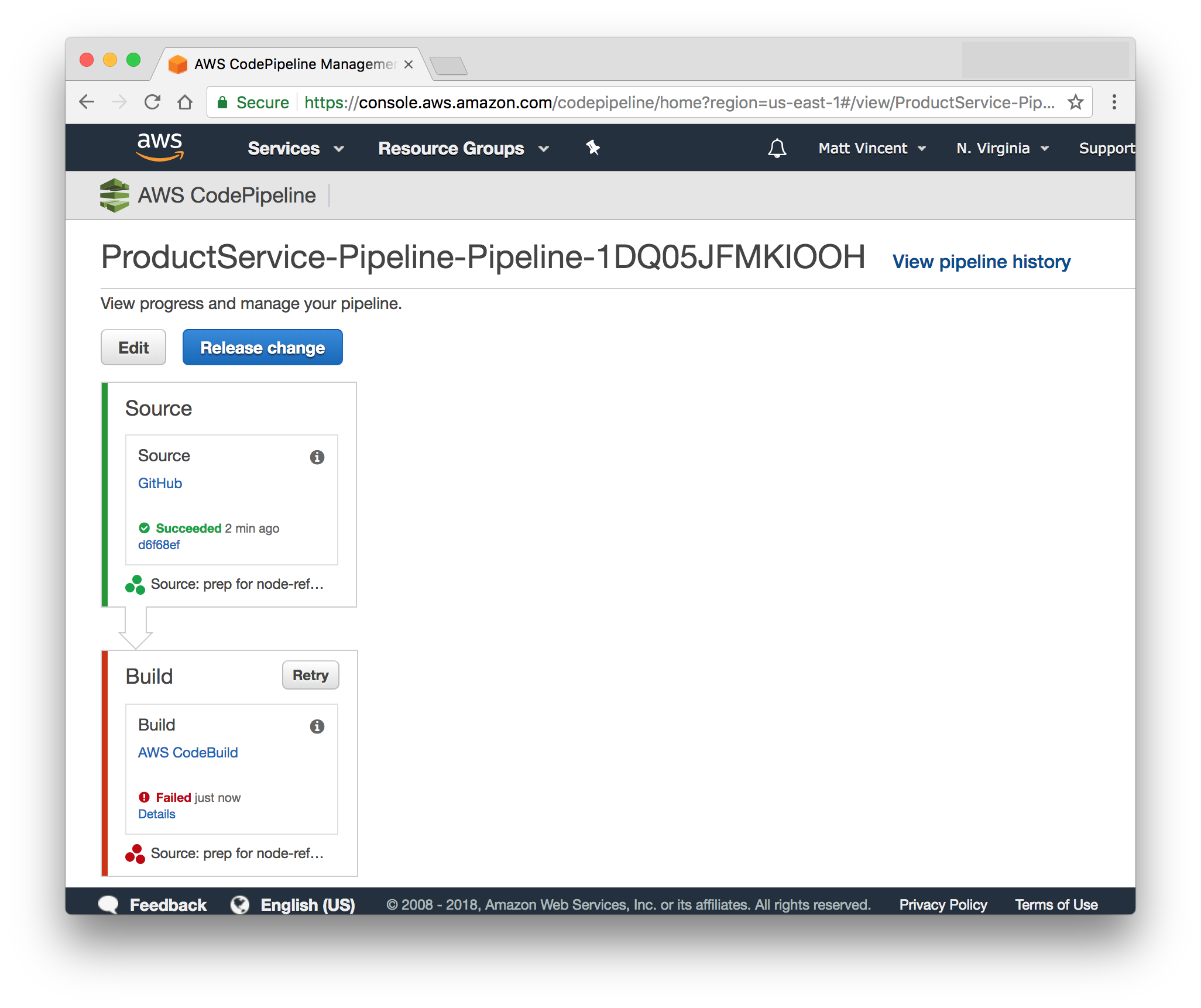 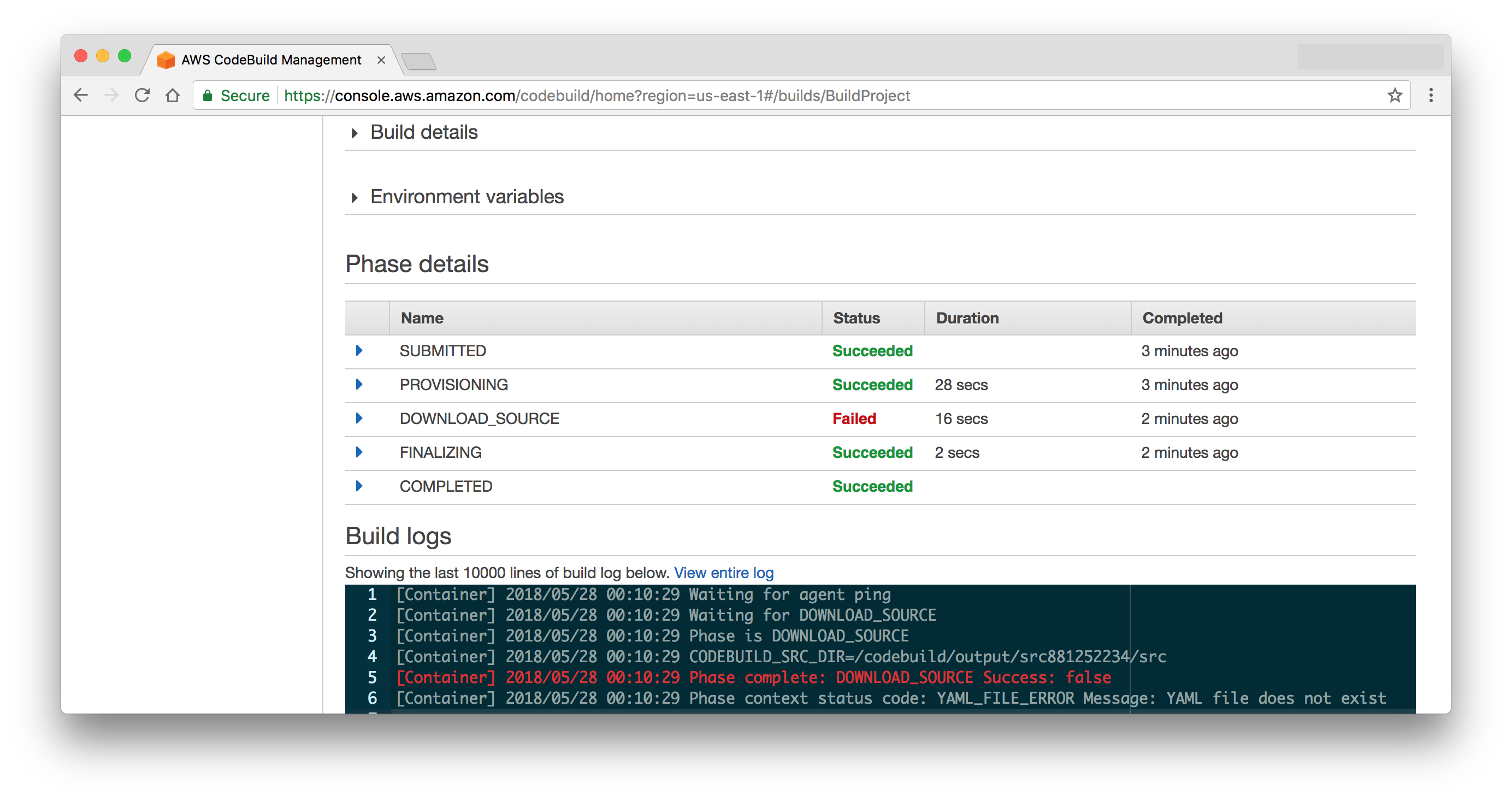 By default AWS CodeBuild looks in the root of the source code repository for this file. Our version of this file is pretty simple since most of the heavy lifting will be done by Docker. Create a buildspec.yml file with these contents:

These are simply shell scripts that are executed in order. The first step (in pre_build) is to calculate a Docker image tag that we will push to specify this build. It is important that we create a unique image for each build so that the deployment of a version will deploy the code built for that version and not simply the last build to execute. the DOCKER_IMAGE_URL variable was configured by our CloudFormation template and the CODEBUILD_RESOLVED_SOURCE_VERSION is a built in variable populated by CodeBuild.

Next, we use Docker to build our image. We then replace the “RELEASE_IMAGE_URL” placeholder with the full id of the image in each parameter file located in the parameters directory. We need some way to pass the Docker image URL into the CloudFormation template that executes the deployment without the template knowing the version ahead of time. To do this, we create a properties file and publish it as a build artifact. The artifacts section is a list of files that get copied forward and can be referenced by later stages in our pipeline (i.e. the deployments to Dev, Qual and Prod).

Check in the buildspec.yml, parameters/dev.params.json and parameters/prod.params.json files and wait for a build to kick off. If all works well you should have a new docker image in your docker repo and a successful build. 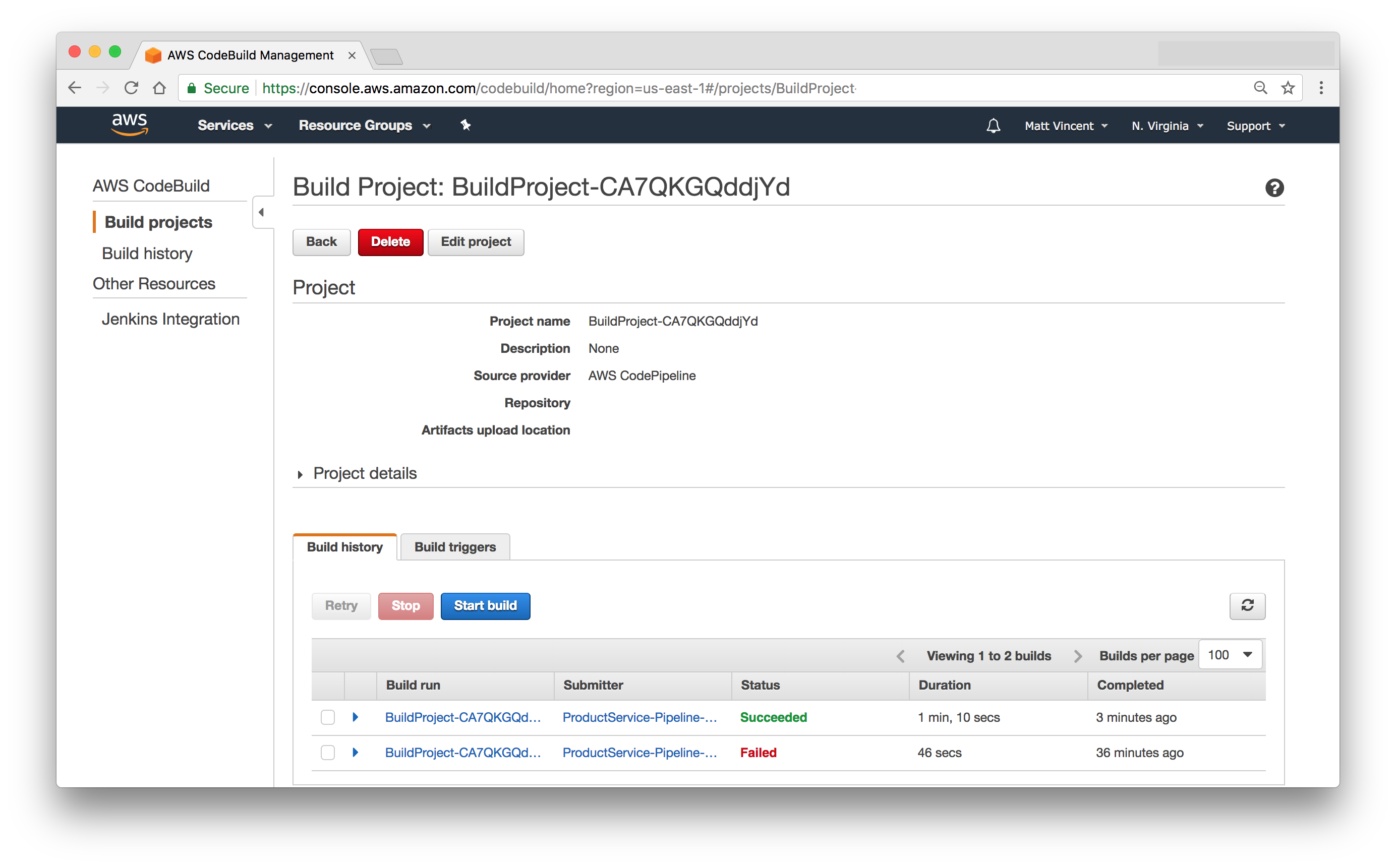 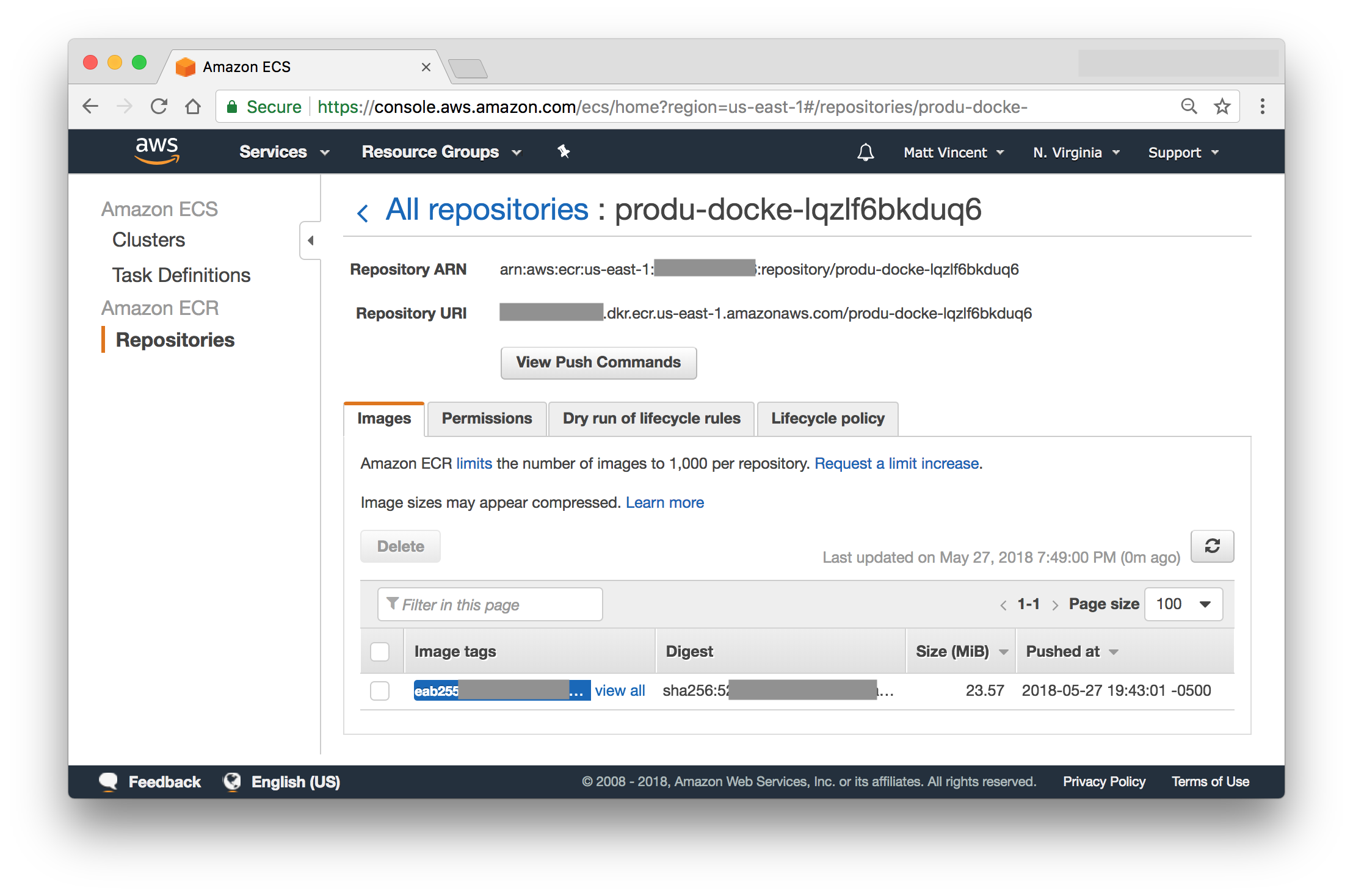 In this article, we setup a build pipeline using AWS CodePipeline. You can see the full CloudFormation pipeline template and buildspec.yml for our microservice here:

You can also see all changes as a result of this post.

If you have questions or feedback on this series, contact the authors at nodereference@sourceallies.com.