This article builds on the prior article about AWS CodePipeline.

With an automated build process underway, it is now time to switch focus to the application’s runtime environments. We will be creating two environments: Development (aka. Dev) and Production (aka. Prod).

Consider wether your project needs more than two environments. Talk with your team about what the definition and use-cases of the various environments are. Are you going to do all end-user demos in a specific environment? Do you have business users that want the ability to “play around” in an environment that is not production but also not under active development? New environments can always be added later. Extra environments carry additional cost but we can leverage the same code to maintain them.

The runtime environment for our Docker image is going to be the Elastic Container Service. More specifically, we will utilize the Fargate configuration. While marketed as a separate product, Fargate is really just a couple of extra configuration values given to an ECS Service and TaskDefinition.

Before the introduction of Fargate there were three main options to run a serverless system on AWS. The first was Elastic Beanstalk. This was a fairly heavyweight service that creates virtual machines for each application (although MultiContainer Docker Environments were later supported) under the covers and provides an abstraction layer for managing these virtual machines. It reduced the burden of maintaining servers, but only partially and it did not address the cost associated with a virtual machine per service approach.

The second serverless option, AWS Elastic Container Service, is a managed Docker cluster that allows the deploying of custom Docker images to a pool of virtual machines. This brings with it the advantages of extremely consistent deployments (due to Docker’s design), as well as reduced cost (because multiple applications can share the same virtual machine). We still have to manage a pool of virtual machines that host these Docker containers.

The third serverless option, AWS Lambda, is a mechanism that allows for a fully “serverless” deployment.

This slide from the 2016 AWS re:Invent keynote shows the vision at that time on how Lambdas fit into the compute spectrum: 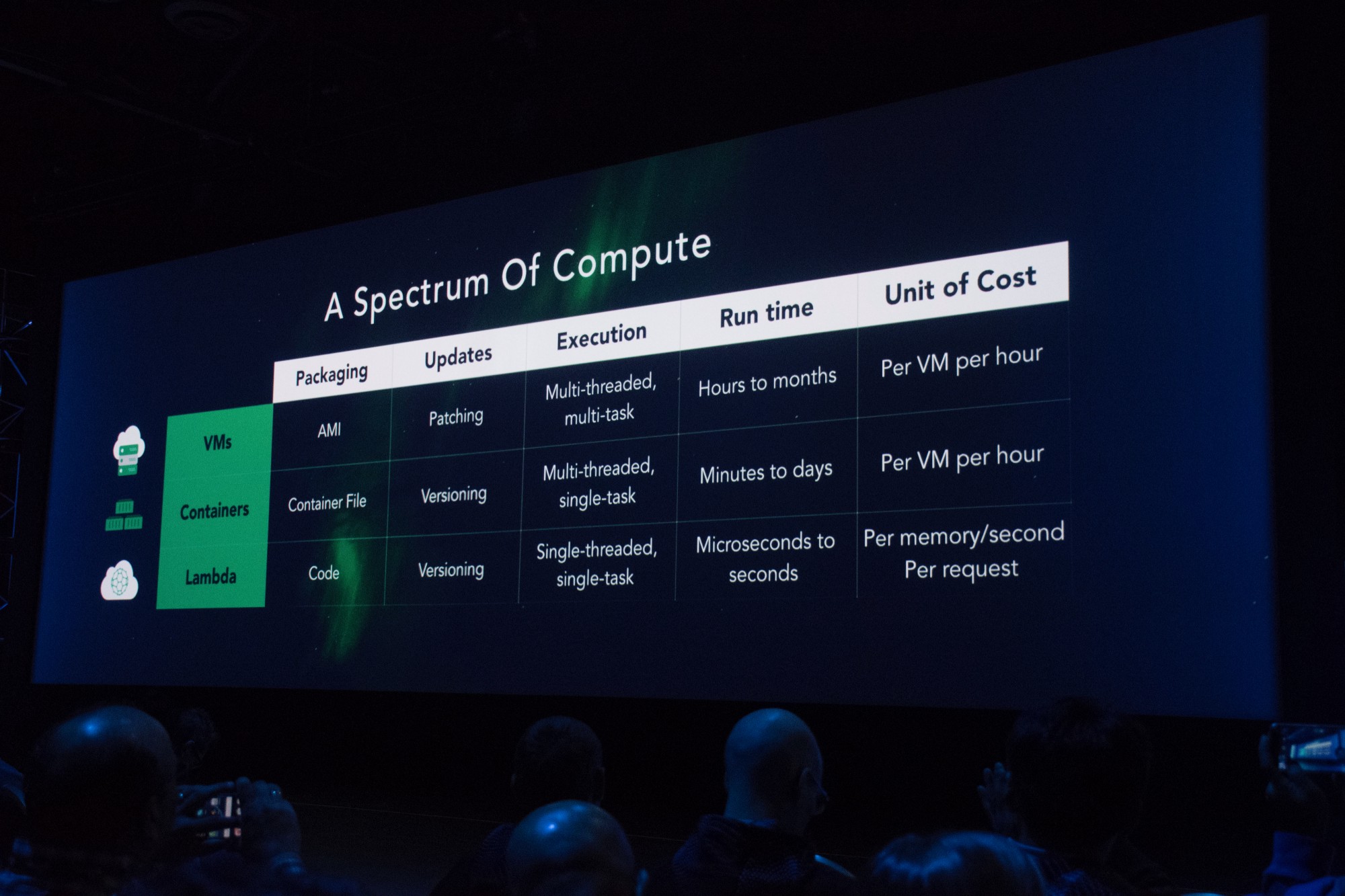 To create a Lambda, a snippet of code (generally doing one small task) is uploaded to AWS and hooked into an event. When the event occurs (a message on a queue or a HTTP request is received), AWS provisions capacity on a pool of VMs managed by AWS and executes the provided code. This is an extremely attractive option because there are no servers to manage and we are only charged when our service is actually executing (by the memory and time consumed).

This model works really well in response to asynchronous events like messaging or a schedule but has some serious downsides when reacting to latency sensitive HTTP events along with several other drawbacks:

All of the above limitations are navigable but require a lot of extra complexity and workarounds that add to the risk of the application and make it harder to maintain and evolve.

Fargate solves these problems for us. It allows us to deploy a Docker container of our choosing (which means we can run any version of anything that runs on Linux; Fargate does not yet support Windows) on a pool of virtual machines that are managed by AWS (so we don’t have to worry about capacity planning and OS patching). The containers are run on our schedule (ie. scheduled or around the clock) so there is no cold-start time. They also just run a normal Linux process so we can do work “on-start” or store files locally on disk. We can run the application locally exactly how it runs in AWS. And, because a Fargate service can receive HTTP traffic (or raw TCP if you prefer), we can leverage the entire HTTP feature set (streams, websockets, HTTP/2 etc). We can keep routing configuration encapsulated in, and closer to, the code that is actually handling that route.

The main downside to all of this is simply cost. Outside of batch jobs or single run tasks, we have to pay to run the container all the time. While this may be significant if there are many environments that need multi gigabyte containers, our Node.js app can happily run on the minimum specs at a cost of about $12 per month per environment.

The first step in this process is to create a cloudformation template with an ECS cluster in it. This cluster will not contain any dedicated VMs but we still need it as a container to reference. Create a cloudformation.template.yml file in the root of the repository with the following content:

Now add the following CodePipeline Stages to your pipeline.template.yml file within the pipeline at the end. These will deploy our environments in quick succession:

Check in your cloudformation.template.yml file and then update the pipeline stack via the AWS CLI as shown below:

You should see two new stacks get created.

These stacks create your Dev and Prod ECS Clusters. 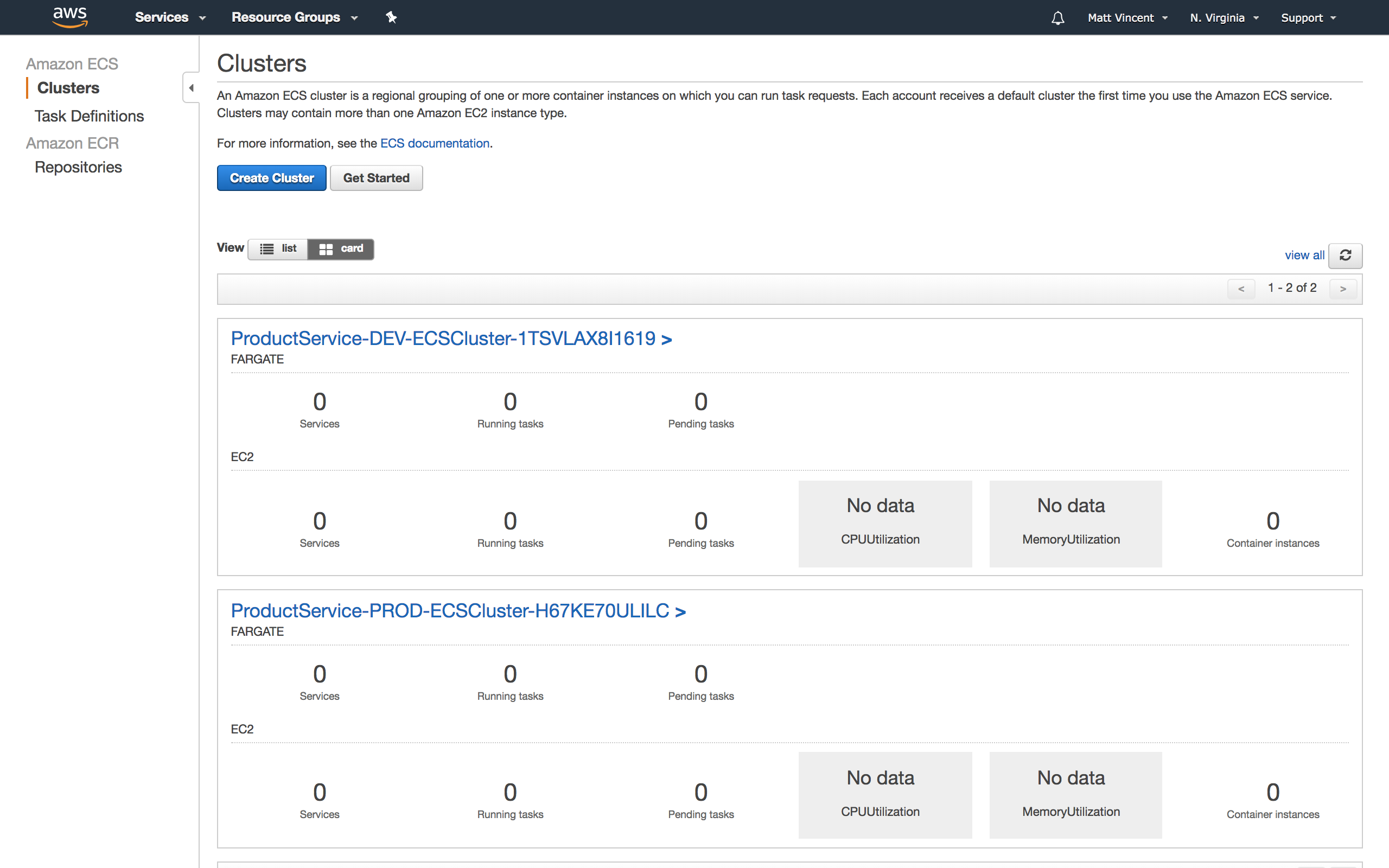 And your CodePipeline is now four stages long (You may need to refresh). 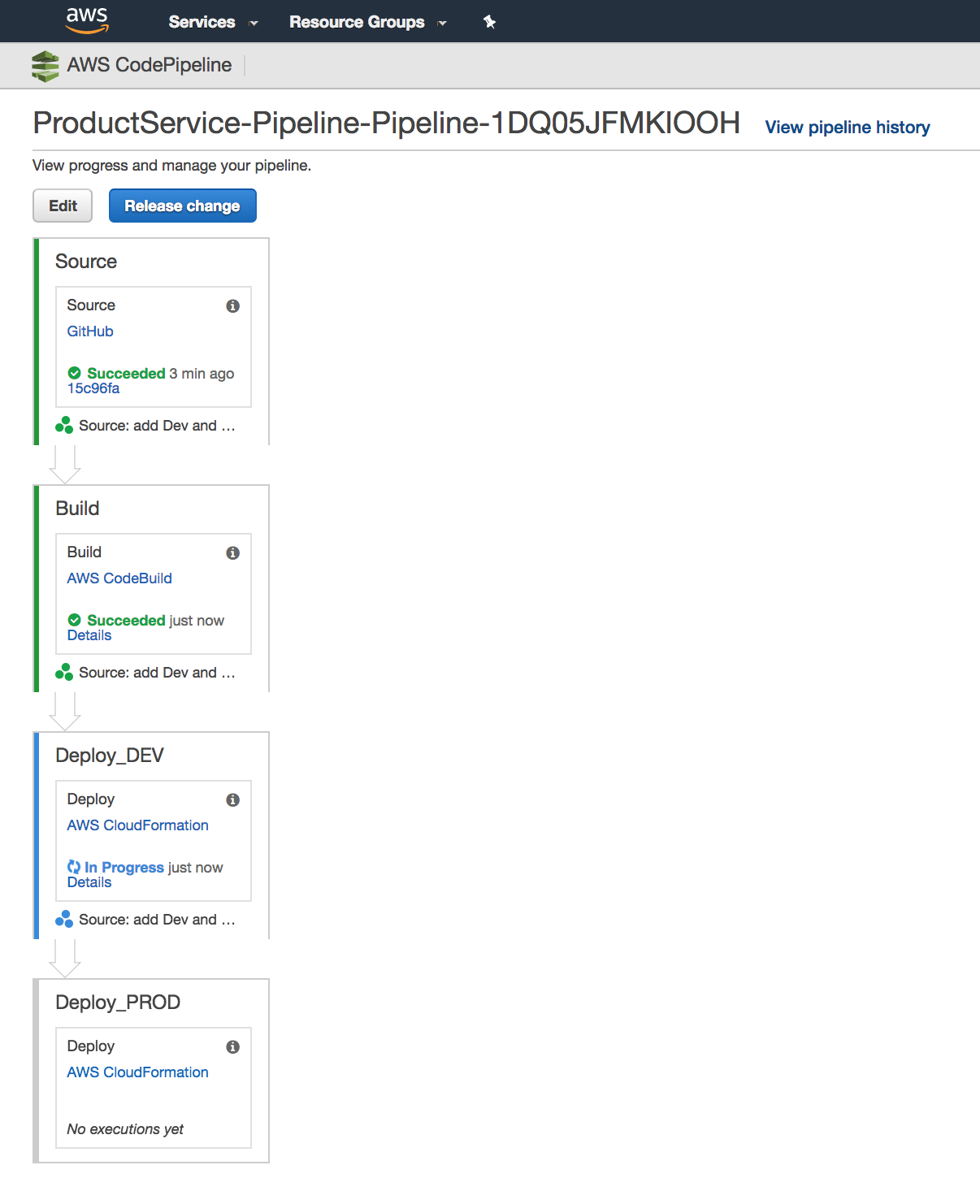 (If you update the stack before checking in the template you will probably see a failure in the pipeline that it can not find the template file).

We now have a continuous delivery pipeline in place that will ensure that infrastructure changes are kept consistent between source control, Dev and Prod!

Important Note For simplicity of this blog series, we are configuring multiple environments inside of a single AWS account. However, we very strongly recommend setting up an AWS account per environment in practice. It’s a seemingly counter-intuitive approach, but there are countless benefits to doing so that are beyond the scope of this series.

Next we need to get your application running and accessible. There are three main pieces to this: a Task Definition, a Service and an Application Load Balancer (also known as a LoadBalancerV2). The Task Definition is responsible for telling ECS how to launch your application. This includes CPU and memory settings as well as an IAM role that will be assumed by the task. Add these resources to your cloudformation.template.yml file:

There is a difference between the way traditional ECS tasks and Fargate tasks obtain IP addresses and communicate with the network. Traditionally, the Docker daemon on the host machine creates a private internal network and issues IP addresses from that network to the containers running on the host. Traffic bound for the wider network is NATed out on the host’s network interface. With Fargate however, this process changes. ECS actually obtains a new IP address directly from the configured subnet and attaches it directly to the Docker container. This means that the IP address the container sees for itself is actually routable from the wider VPC. Unfortunately, as of right now, there are some issues resolving this address by doing a hostname lookup inside the container. See this article to learn more on this topic.

The ECS Service governs the execution and placement of a “Task.” This is the resource that will handle ensuring the correct number of instances are running. It will handle rolling deployments to ensure no-downtime deployments. It also manages the LoadBalancerV2’s list of targets so that requests are routed only to healthy instances.

Because the Load Balancer connects to the network in which these instances execute, we need to specify two new parameters in our CloudFormation template and populate them. Add these to the “Parameters” section of your cloudformation.template.yml:

If you created your AWS account after 2013-12-04, you should already have a default VPC and subnet configured. You can get your default VpcId and SubnetIds by running the following commands:

If you don’t have a default VPC, or want to create your own Internet Gateway, VPC and public/private subnets, you can run these AWS CLI commands to create them and capture the corresponding VpcId and SubnetIds for your cloudformation.template.yml stack: (This template expects the region to have 4 or more availability zones and will not work in regions such as us-east-2 which has 3 availability zones. Check the availability zones in your region with the following command: aws ec2 describe-availability-zones --region your-region):

Note that the “SubnetIds” parameter is a comma-separated list and not a JSON array. Also, remember to leave the “RELEASE_IMAGE_URL” unchanged so that our buildspec.yml file can replace it at build time.

With these networking settings now available in our template we can add the Service resource to cloudformation.template.yml:

Update your CloudFormation stack by checking in cloudformation.template.yml and the parameter files. You can see the changes we made.

When CodePipeline sees your change and deploys it you should have a running service with one task. In the next blog article in this series, we will front this service with a load balancer.

If you have questions or feedback on this series, contact the authors at nodereference@sourceallies.com.